The Insane World of Blockbuster Economics

Last week, Deadline.com released a small and exceptional dataset: the profit and loss statement for 2014’s Top 20 performers at the global box office, from the latest “Transformers” installment (which grossed more than $1 billion at the box office) to “Interstellar” (which clocked in at almost $673 million).

This is a rare document: these numbers are usually treated as state secrets in Hollywood, so this is the first time in recent memory that actual P&L numbers have surfaced in the open.

And it’s easy to see why. The gospel of blockbuster economics is that inflating production and marketing budgets to churn out “tentpole” movies will breed higher financial returns for studios. But applying simple data analysis models on these numbers reveals a far different story, one of very strange economics and inefficiencies so massive they would never be tolerated in any other industry.

It’s important to set off with one very strong caveat: any data analysis is only as good as the data itself. “Garbage in, garbage out” as statisticians like to say: the most sophisticated math will never extract meaningful and reliable insight out of bad data.

Conversely, very simple statistical models can uncover powerful and complex patterns from good, clean data. Clearly, a P&L statement is less prone to error than sampled behavioral or social media data, both of which have a lot of noise, so there should not be any bias (unless someone purposely fiddled with the numbers).

But this is single-source data, and while there is nothing to suggest that it is incorrect or biased, only senior studio executives can spot check Deadline’s dataset with their own numbers.

Also, it’s important to note this dataset only covers 20 movies, so the analysis below doesn’t generalize to all films produced in the US. It also only covers one year, so it’s unclear whether it describes a long-term trend, although there is no reason to believe studio executives would have made different budget decisions in 2014 than in 2013 or 2012.

But assuming this data is reliable, here are a few very surprising takeaways.

1. Foreign markets are where Hollywood’s big production bucks get their biggest bang:

On the surface, classic blockbuster economics seem to hold water: a simple linear regression analysis of the correlation between costs and overall gross revenues (including merchandise, TV rights, syndication, pay per view, etc.) for the 20 top box office performers of 2014 shows a very strong correlation (about 84%) between the two (see plot below). 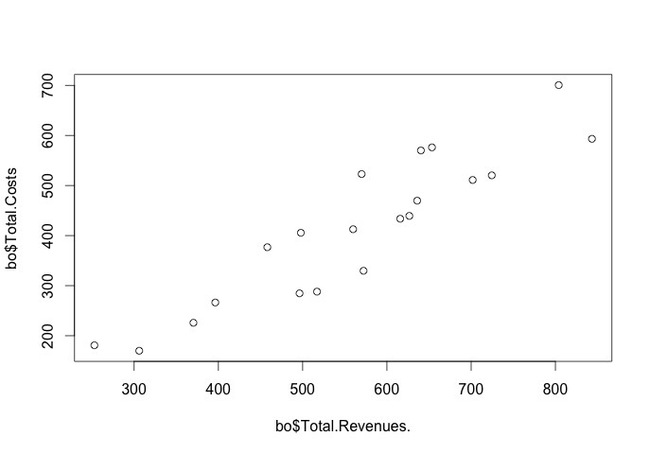 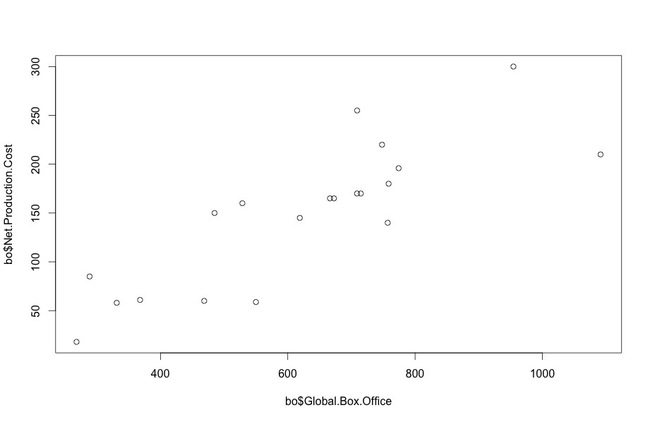 Each dot in the graphs above represents one of the top 20 best performing movies at the box office in 2014. It seems like the dots are more or less aligned on a single line: statisticians call this a positive linear relationship; here between production costs and global box office income. Translation: in 2014, every extra dollar the studios spent on production costs for a blockbuster movie generated extra global box office income on average 70% of the time.

In finance, these are definitely great odds. But look a little closer and unpack the numbers a little further, say by splitting domestic and foreign box office income, and things get, well … very interesting.

Clearly, bigger production budgets generate a lot of money for Hollywood abroad, since the 2014 data shows a 75% correlation between production budgets and foreign box office income (see plot below), which represented a solid 63% of total box office revenue for that year’s top 20 performers. 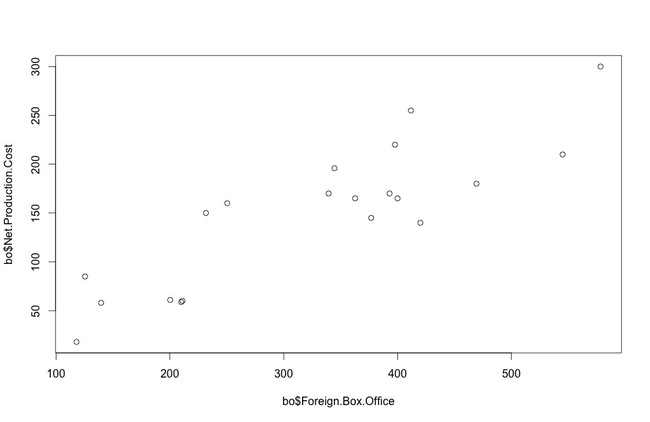 See how the dots once again align on a single invisible line? Again, this indicates a positive linear relationship, and it means that big production budgets make a lot of sense if Hollywood wants to make money abroad.

But what about domestic box office? Let’s look at the data: 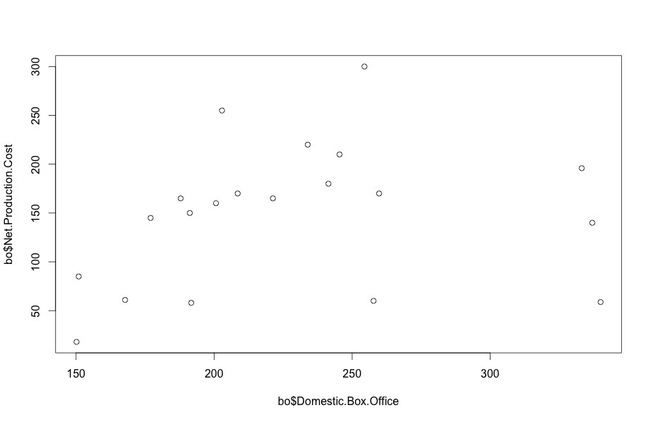 The picture here is radically different: the data shows that, on average, net production costs have a very small, only 4.8%, correlation with domestic box office income, which represented 37% of the total in 2014. This means there’s virtually no relationship with how much money Hollywood spends on producing big blockbuster movies and how much money these films gross domestically. At this stage, this suggests that bigger budgets, bigger stars and bigger action didn’t generate bigger domestic audiences in 2014, but they definitely correlated to higher foreign income, where audiences seem to be more sensitive to the traditional blockbuster mix.

2. There is no relationship between net production costs and net studio revenue:

The data is very clear: plotting the correlation between net production costs and net revenues shows almost no relationship (4%) between how much Hollywood studios spent producing big blockbuster movies in 2014 and how much net profit they extracted from it. 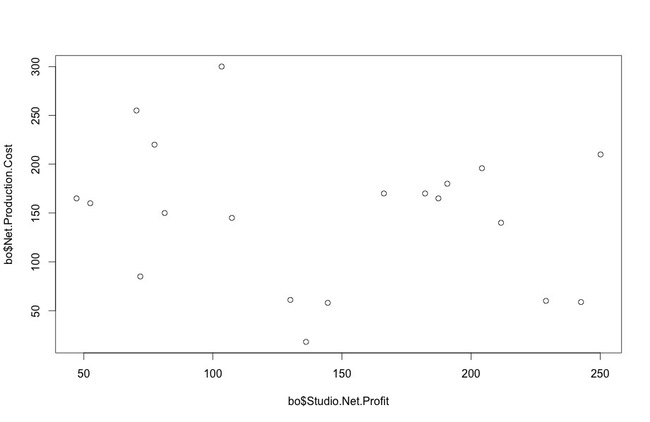 See how the dots are all over the place? This means that, in 2014, blockbuster movies made a lot of money … but that that income was pocketed elsewhere in the Hollywood ecosystem, including with those who actually made the movies, especially the lead cast, on which shoulders these blockbusters usually rest (it’s particularly important for foreign markets). Movie stars with a lot of international pull, such as Tom Cruise or Channing Tatum, usually negotiate a substantial profit participation in their movies. Various profit participations (the director gets a cut, the writer gets a cut, etc.) are the reason why profit margins for big tentpole movies are so low in Hollywood (“Transformers” was the highest grossing movie of 2014, with more than a billion dollars, yet only made $250 million for its studio). They are also why it’s so difficult to secure outside financing for even big action movies these days. It seems the studios, which bear most of the financial risks in movie production and distribution, are getting a terrible deal. And that in Hollywood, unlike in other industries, the fruits of labor are juicier than those of capital. Marx and Ari Gold would be proud.

The second tenet of blockbuster economics is that inflating marketing budgets will generate more awareness in the public and thus higher box office grosses.

Let’s look at what the data says about this. The sample data doesn’t explicitly mention marketing costs, only “releasing costs”, but it’s safe to assume that the terms are interchangeable. 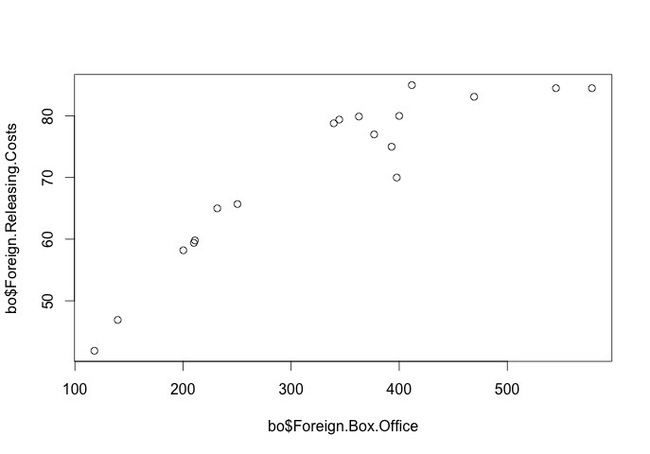 But here again the domestic picture seems extremely different, an this may be the bigger shocker in this data: the correlation between domestic marketing budgets (which represented 50% of the overall budgets for these movies in 2014 … around $1.3 billion) and domestic box office income (37% of total) for the top 20 performing films in 2014 was … very near zero.
0.3% to be precise. 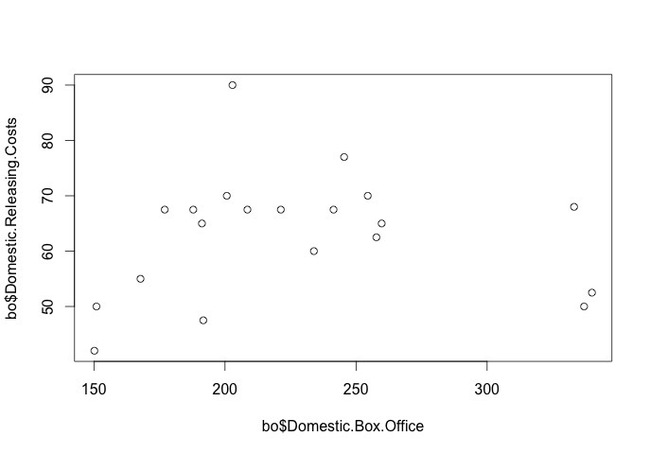 There could be a simple explanation for this. The function of marketing, especially in the film industry, is to build awareness of an upcoming release as well as intent to go see it in theaters. Marketing may be efficient for obscure or indie movies, which we become aware of a few weeks before their release (and therefore we build intent to see through increased awareness), but big franchise movies like the next “Transformers” or “Avengers” get hyped up months, if not years before their release.

The US moviegoing public is constantly up to date with the latest cast information, plot leaks, teasers, trailers, etc. This 365-day buzz machine, which usually happens through earned, not paid media, does a powerful job of building awareness and intent even without the studios spending a dime (nooo, thank YOU Nerdist !).

By the time the paid marketing campaign for a blockbuster movie rolls around, people are already aware of the movie, and they’ve already made up their mind. The box office is already locked up, and marketing budgets won’t tip the scale one way or another.

This is the irony of domestic film marketing: it’s spent mostly where it doesn’t matter, not where it would have the most impact: on independent movies or properties for which it would efficiently build awareness and intent.

One of the most commonly mentioned drivers behind expensive domestic marketing campaigns for films is that studios have to contractually take on the cost of raising their stars’ public profiles by spending large amounts on inefficient ad campaigns. A-list talent, in turn, guarantees higher returns on foreign markets, where moviestar appeal still gets people into the theaters, and where studios make most of their income.

But as we have seen, this income gets siphoned off by huge costs, including financial redistribution to the talent itself, which, as the data shows, seems to be the only one in Hollywood laughing all the way to the bank.

In Page &amp; Brin’s Alphabet, S is for “Singularity” … and the Future of the Corporation

Page and Brin did it again. With the rollout of Alphabet, they reminded us they are still the most consistent and visionary leaders in business today. Like it or not, Google’s founders have one central ambition: bringing about the... Continue →